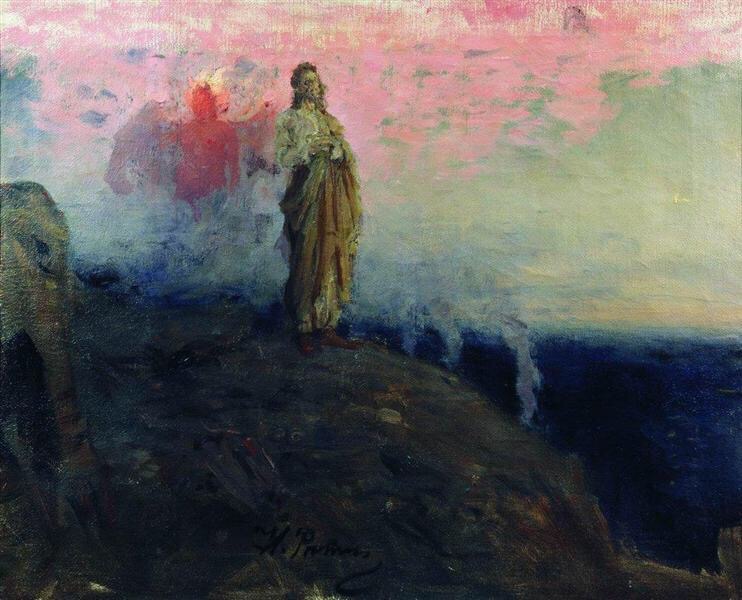 One of the most remarkable stories in the Bible is the story of Jesus’ temptation. It is written, “[He] was tempted in every way as we are, yet he did not sin.” (Heb 4:15) And yet, we only have one instance of temptation recorded, and we have that same instance recorded in three of the four gospels. I am not saying that Jesus wasn’t tempted elsewhere in his life, but it seems that this was a very important example of temptation. In fact, I would venture to say that the story of Jesus’ temptation is one of the most important stories in the gospel for Christians. In it are the principles for how we navigate temptation and challenges in our life.

Before we look at his temptation, it is important to to think through the implications of the theological concept of “Kenosis.” This is a Greek word that means to self-empty. It is used in Phil 2:6-7,

“[Jesus], being in very nature God, did not consider equality with God something to be used to his own advantage; rather, he made himself nothing by taking the very nature of a servant, being made in human likeness.”

The crucial idea within Kenosis is that Jesus came to earth as a human without access to his Godly powers. “He made himself nothing…” This is the emptying of all God-qualities. Jesus was not a super-baby. All the iconography of Jesus blessing people as a baby is misleading. He did not have some sort of supernatural intelligence or power as a man. Rather, he lived his life as we lived, learning and growing as a young Jewish male in the first century AD. This means that he could actually experience temptation. If he were God, with the knowledge of all that is and was and is to come, how could he be truly tempted? If he had the unlimited power, knowledge and communion of the Trinity, how could he be tempted by anything?

Instead, he had to learn of his identity as we do. He searched the Scriptures, he learned of God from his parents, he was brought up in the way of the Lord by his local community. I am sure that he grew up hearing the stories of his miraculous birth. He had promises spoken over him. He grew in “wisdom and stature and favor with God and man.” So when we get to Jesus’ baptism, we can imagine that he was working from his relationship to God at that point. He seems to have had some idea of his identity. When he was eleven he replies to his mother and father after going missing for three days, “Why were you searching for me? Didn’t you know I had to be in my Father’s house?” (Luke 2:49) So when he turns thirty, God tells him to go get baptized in the Jordan. This perfect man gets baptized as a representation of all of the new creation. John tries to turn him away, but Jesus knows enough by now to know that this is for the “fulfillment of all righteousness.” And then he gets the clear call of his identity as the dove decends upon him and the voice of God speaks, “This is my beloved Son, with whom I am well pleased.”

The firstborn of the New Creation gets baptized into his true identity as the Son of God. He has been reading about the Messiah his whole life. His knowledge of the Torah is shown throughout his ministry. He knows the prophecies about Messiah and now he has been confirmed and commissioned in his call. Throughout the Bible, as people are called into their identity and given promises about their life, they enter into a period of testing. Joseph was promised to be a ruler with the stars of heaven and sheaves of wheat bowing down to him then he was sold into slavery by his own brothers, then he was falsely accused and thrown in prison. It says in Psalms 105:19, “the world of the Lord tested him.” So now, Jesus is tested by the word of the Lord.

He is led by the Spirit into the wilderness and after forty days of fasting he is hungry (ya think??). So in his weakest moment, the devil comes and tests him. The fascinating part of this dialogue is the nature of the temptations. There is no obfuscation here, the entirety of his temptation is about the identity and the promises God has spoken over Jesus. Jesus, the presumptuous Jewish man who has the audacity to believe that God has called him “Son” and to promise him the salvation of the world.

Satan begins, “If you are the Son of God, command these stones to become loaves of bread.”

Hold up. This isn’t even a sin! The tempter is merely asking him to perform a miracle of provision in confirmation of the word God spoke to him. But we know better. This about whether Jesus trust the identity God spoke over him and his answer shows how tightly he is holding to God’s word.

He answers, “It is written, ‘Man shall not live by bread alone, but by every word that comes from the mouth of God.'”

All of our temptation to doubt the word of God, to be anxious for provision, to want proof of God’s favor, and Jesus clings to the Word of Truth.
Again, Satan tries a different tact. He takes him to the Jerusalem and sets him on the pinnacle of the temple. “If you are the Son of God, throw yourself down, for it is written, ‘He will command his angels concerning you,’ and ‘On their hands they will bear you up, lest you trike your foot against a stone.'”

Satan throws Scripture in Jesus face. You can imagine him thinking, “Two can play at this game…” Now Jesus has a promise and Satan is only asking him to test the promises of Scripture.

Jesus answers, “Again it is written, ‘You shall not put the Lord your God to the test.'”

Lastly, the devil goes after the destiny of Jesus. Ok, maybe you know who you are, but now you have to decide whether you can trust God’s calling on your life. Jesus has an impossible task before him. The Devil takes him to a very high mountain and shows him the kingdoms of the world and their glory. Now, remember, Jesus knows that, “Kingdoms shall come to your light, and kings to the brightness of your rising.” (Isaiah 60:3) So Jesus is seeing the smallness of himself in the light of what God said he would do. Satan offers him a shortcut. “All these I will give you, if you will fall down and worship me.”

Ok, so we all know not to sell our soul to the devil, but how often do we make small compromises to get what we want? God promised to provide, but I don’t see the provision so I am going to go apply for a credit card. God promised to fulfill me, but I feel unfulfilled so I will enter into a relationship without consulting him to see if the relationship is one that God wants for me. These are broad examples, but every day we are confronted with choices of priorities. Are we going to worship God or _____?

Jesus shows us once more the power of the Word:

“‘You shall worship the Lord your God and him only shall you serve.'”

One more note about this last temptation. Idolatry is the most confronted sin in the Old Testament, and we often think that we have not struggles with that. We would never worship a statue, but the nature of idolatry is far more insidious than that. The pastor of my church is always saying, “Idolatry is when we say, ‘I will be happy if I have God and ____.'” Whatever is in that blank–romance, money, a career, security, children, etc.–is the idol that we are serving.

How many of us have know our identity in Christ? How many of us know the promises and prophecies that have been spoken over us? We should hold fast to these words and not give in to fear when the words test us, when we don’t yet see their fulfillment. Jesus was unwilling to shortcut God’s process even though it led through suffering and death. Because he held to the promises of God over his life and the specific words God had spoken to him about his identity (both through prophecies directly to him and through the Scripture), Jesus was able to walk in the power of God and not stumble. We should do the same. When confronted with our various challenges and temptations, let us focus on the promises and the identity God has given us and cast our mountains into the sea.

Now to him who is able to keep you from stumbling and to present you blameless before the presence of his glory with great joy, to the only God, our Savior, through Jesus Christ our Lord, be glory, majesty, dominion, and authority, before all time and now and forever. Amen. (Jude 1:24-25)

Liturgy and the Sacraments – Part 3