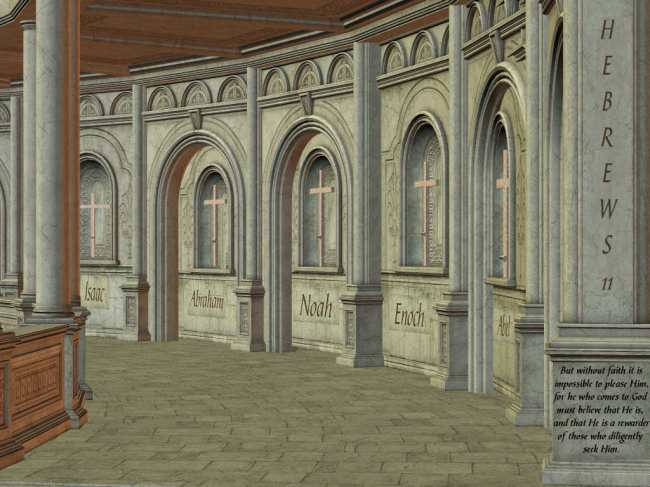 First, I need to apologize for not following up my last blog as I had planned to with a list of Kingdom Principles… It proved to be a bigger task than I expected. For now this blog will remain random bursts of impassioned writing attempting to relay whatever facet of Truth happens to have ignited my interests enough to require a blog entry. Hope you are encouraged!

I was reading Hebrews 11 today and was struck by the last verses of the chapter (and the beginning of chapter 12). Some of you may have heard this chapter referred to as the Hall of Faith and it is quite the challenge to get through in one sitting. There is so much here! The writer of Hebrews simultaneously argues for Christianity to the Jews using their most revered ancestors, does some serious exegetical work that refines and nuances the Christian faith we take for granted today, and sets up the link for the Hebrew Christians (and all Christians afterward) between the God-breathed Old Testament and the New Testament. For the sake of this blog however, I am going to just focus in on the last section and what it might imply for us.

In Hebrews 11:32, the author begins the ending of his treatise on the Hall of Faith. In 11:33, He describes the actions accomplished through faith (argued here and elsewhere to be the same faith as our own) by OT figures, “who through faith conquered kingdoms, enforced justice, obtained promises, stopped the mouths of lions, 34 quenched the power of fire, escaped the edge of the sword, were made strong out of weakness, became mighty in war, put foreign armies to flight. 35 Women received back their dead by resurrection.” Oh yeah! This is the Christianity I am all about! We have access to a faith that can move mountains and do all that other cool stuff with kingdoms and strength and lions! If you get nothing else from this blog please understand that our faith is POWERFUL.

But… there the author is not finished yet. He continues, “Some were tortured, refusing to accept release, so that they might rise again to a better life. 36 Others suffered mocking and flogging, and even chains and imprisonment. 37 They were stoned, they were sawn in two,[a] they were killed with the sword. They went about in skins of sheep and goats, destitute, afflicted, mistreated— 38 of whom the world was not worthy—wandering about in deserts and mountains, and in dens and caves of the earth.” Wait a second… That doesn’t sound like the faith I signed up for. A faith that leads to social, physical, and emotional persecution? A faith that could even lead to death? Well I guess there are things in life worth difficulty, “no pain, no gain” and all that. In the end they lived happily ever after, right? God promises abundant life here right? That doesn’t sound too abundant. Well next He writes something that blows my mind, “39 And all these, though commended through their faith, did not receive what was promised…” This is my favorite pat of the chapter. These men and women of faith experienced the power of God in ways I can hardly imagine and were persecuted in a similarly spectacular fashion, but they did not receive the promise. They continued to persevere in faith (through many bumps on the road) for a promise they never fully received. And yet, without them, we would not have received the promise of God. God used them to further His Kingdom, the promise they were pursuing, so that we could share in its inheritance. The author continues, “40 since God had provided something better for us, that apart from us they should not be made perfect.” We were given the Kingdom as our inheritance. We were given the promise that the whole heritage of our faith was looking towards!

There is more here than I could possibly cover, but two thoughts: what an amazing and unappreciated inheritance we have through Christ! and God fulfills His promises even if you do not see it in the short term (we’re talking thousands of years here) 🙂

Chapter 12 “Therefore, since we are surrounded by so great a cloud of witnesses, let us also lay aside every weight, and sin which clings so closely, and let us run with endurance the race that is set before us, 2 looking to Jesus, the founder and perfecter of our faith, who for the joy that was set before him endured the cross, despising the shame, and is seated at the right hand of the throne of God.”

No commentary can surpass the power of these last two verses. Thank you Jesus!

Married to an artist and the oldest of nine children, I am passionate about people, theater, movies, music, literature, art, worldviews, beauty, truth, and goodness. View all posts by glastonburyeagle